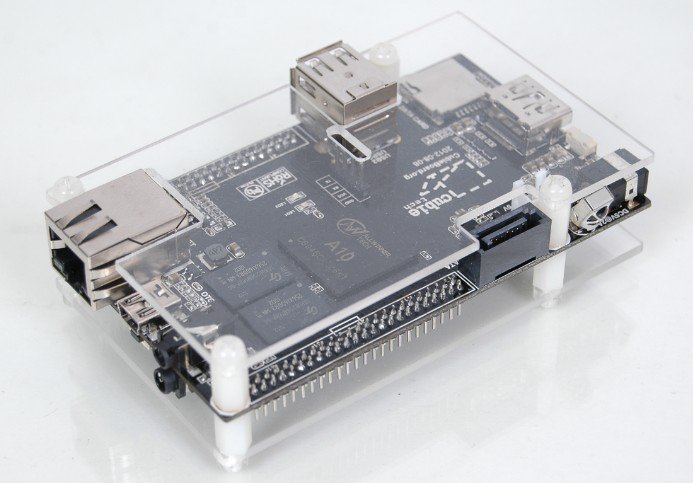 I was searching how to replace my X86 server by some arm based server.  The main objectives was to lesser power comsumption and optimize the fault tolerance of m infrastructure (several am computer is better than one simple x86 machine running virtual machines…).

After a little research on arm computer, I chose the Cubieboard for its good power/price ratio and the support we can find for it.

Basicaly, I found all informations I needed on the following site :
https://github.com/linux-sunxi/u-boot-sunxi/wiki

Thanks to sdcard optimization (see article), I got the following results:

Deploying the base system

The way I chose to Install Debian on my cubieboard, I chose to get an image of a base install and then copy files to the final destination SdCard (by default, the cubieboard tries to boot from SDcard slot first).

I got the base debian wheezy image from :
http://guillaumeplayground.net/share/debian_wheezy_armhf_v1_mele.img.gz

To allow the Cubieboard to boot on a microSD, we need to copy the u-boot bootloader on the very first blocks. In order to do that we have to compile u-boot for this specific board (I’m using archlinux on my laptop and /dev/sdc is the microSd) :

Then put the card in the cubieboard, And was able to ssh to it after a little research for the ip it had been given by my DHCP (l/p = root/root)

I updated the whole sytem thought apt-get dist-upgrade, then like for my Sheevaplug I made some tmpfs mountpoint in /etc/fstab

I also set the IO Scheduler to Deadline (better than “noop” for nand) and overclocked a little bit the SoC in rc.local:

Make use of the SATA Port

As I want to use my Cubieboard as a personnal web server with lots of images and/or videos, I needed to use an hardrive in addition to the SdCard.

The Cubieboard provide a Sata Port and suitable cable for a 2.5 inch drive, but the port is not powered by default. To enable this, you have to modify the boot params of the bootloader (the .fex file in /boot):

Note that depending on the power your hardrive need, you may have to plug another power supply throught the mini-usb (OTA). In my Case, I had to add an 1A powersupply together with the original one…

After a reboot the hardrive powers on and is recognized by the system.
Installating the Lamp stack is then pretty straight forward, like on any debian server…